Within the past 48 hours or so, Ogun State has been embroiled in needless controversy over the competing claims of Governor Dapo Abiodun, his team and the Senate Committee on Aviation as regards the ownership, relevance, stage of work, viability, documentation and priority claims between the Federal Government-owned Abeokuta International Airport in Wasimi and the proposed Ogun State-owned Ilisan Cargo Airport. Speaking on national television, the Chairman of the Committee, Senator Smart Adeyemi described this scenario as a very interesting and welcome development as the Gateway State is blessed and viable enough to host as many airports of all descriptions as the Stakeholders want, ready and willing to fund. We thank the distinguished Senator and his colleagues for their visit to Ogun State.

As the immediate past officeholders and administration in Ogun State between 2011 – 2019, we have long taken the position not to get involved, banter or trade claims with the current administration. The reasons are obvious. As members of the same political party, APC, we owe ourselves a seamless and cooperative disposition in a manner that all Ogun residents and stakeholders irrespective of divergent tendencies and persuasion will maximally benefit from the dividends of democracy and rapid progressive socio-economic development that our party is known for.

We were determined to do everything possible to uphold the dignity of the offices, particularly that of Governor of Ogun State, and the institution it represents for the greater good of our people. However, watching the video and reading the accounts of the meeting between the Senate Committee on Aviation and officials of the Ogun State Government, and the many lies and concocted half-truths, we consider that we owe our people and Nigerians at large the duty to speak the truth without necessarily infringing our ‘Sidon look’ disposition.

The Abeokuta International Airport project in Wasimi, Ogun State was conceived in 2008 by the Federal Government as an Airstrip. The location was particularly well thought out: only 5 minutes from Yewaland, Ogun West Senatorial District, with both Lafarge Cement and Dangote’s Ibeshe Cement plant as immediate neighbours; in close proximity to the Federal Government Olorunsogo Power Plant, Onijanganjangan, Agbara, Ota, Abeokuta and Sagamu Interchange industrial hubs.

The industrial Gas belt and both the old and new Railway lines, the Standard Gauge, and Kajola Railway integrated transport hub, lie within minutes of the Airport site. These industrial clusters helped to crown Ogun State as the largest concentration of Industries and Manufacturing activities in Nigeria. It is on record that the Federal Government, since 2009, made appropriation and consistently prosecuted this project. Indeed, the perimeter fence for the Airport was completed in 2010, a year before our assumption of office in 2011.

The Ilisan Cargo Airport, on the other hand, was conceived by the Otunba Gbenga Daniel administration in 2006. After we took office in 2011, we sought to know the progress of the project. We visited the proposed site and sought technical advice on how to proceed. The Contractor engaged by the former administration refused to cooperate with us. He refused to avail us of the drawings and technical details. For unclear reasons, he chose litigation, after we rejected their humongous monetary claims. When we visited the site, we observed that it was in a built-up neighbourhood and there were several encroachments.

There was nothing on the ground, not even a perimeter fence to delineate the project site – the only feasible thing was a signpost with the Ogun State logo indicating the name of the Cargo Airport, Ilisan. Though the Ilisan proposed Cargo Airport site will ordinarily be suitable but the large scale encroachment and built-up areas had made the site unsuitable for the project.

The Experts engaged by our Administration in 2012 advised that an airport in Ogun East Senatorial District will be best sited within Ogun Waterside and Ijebu East Local Governments to serve the Olokola Free Trade Zone axis, and will make more sense on account of the proposed Deep Sea Port projected for the area and the activities along the Ijebu-Ode/Epe corridor.

Besides, the Experts equally pointed out the suitability of the axis because it is a greenfield and free of encumbrances. They were very clear that the site chosen in Ilisan has totally become unsuitable for an airport – be it Cargo or otherwise as of March 2012. Faced with these practical and technical realities, our attention shifted back to the Federal Government-owned Abeokuta International Airport, Wasimi, which was already ongoing.

As we were not in any doubt that an Airport anywhere within the shores of our State will be good for our people, we vigorously engaged the then President Goodluck Jonathan administration. Correspondences were exchanged followed by several project site visits. We did the same after President Muhammadu Buhari came on board. We observed that the monetary appropriation for the Abeokuta Airport project, though regular, were meagre. To ensure that our people get to reap this particular dividend of democracy in record time, Ogun State Government requested and was granted permission to get involved and speed up the project.

We knew and understood clearly the importance of infrastructure in the socio-economic development of a State or Country. That is why we embarked on massive infrastructural development immediately after our Administration was inaugurated. We were therefore able to move the Internally Generated Revenue (IGR) of Ogun State from N700 Million monthly when we got into office in May 2011 to a little over N7 Billion monthly when we left in May 2019.

For the record, our Administration engaged the Federal Ministry of Aviation on the need to upgrade the Airstrip to a full-fledged International Airport. The request was granted and the Airstrip status changed to an International Airport with a full bouquet for Passenger, Cargo, Aircraft Maintenance, Storage and Warehouses, VIP/Executive services, Aircraft Hangers/MRO, as well as Flight Training School and Education Building, among others.

The project was designed to serve as a major ‘pressure reliever’ to Lagos Murtala Muhammed International Airport whose facilities had reached a breaking point. It was expected to leverage off and take full advantage of Abeokuta’s proximity to Lagos, to ease and speed up the movement of passengers, goods, services and business to the State from the rest of the Country and the World.

It is also important to state that the Abeokuta International Airport in Wasimi has a much bigger Cargo and Agro-Allied terminal, which is the sole focus of the proposed Cargo Airport, Ilisan.

It is on record that after we left office in 2019, the current Governor Dapo Abiodun led administration instituted a probe, cleverly called Project Review Committee, into 110 (One Hundred and Ten) of our legacy projects, including our intervention at the Abeokuta International Airport, Wasimi.

The Engr. Mokuolu led Committee visited, inspected and evaluated the Abeokuta International Airport project, among others. The report was submitted to Ogun State Government in April 2020. Not only did the exercise put a lie to the claims that the current administration knew nothing about the project, but the reports of the Verification exercise also had kind words about the quality and standard of projects embarked upon by our Administration. We need not say more.

We have said we will take no interest in trading blames with the current administration. It is for this reason that we shall overlook the fact that from day one, the current regime in Ogun State simply wanted the Abeokuta Airport project in Wasimi moribund. Very early after it took office, the Ogun State Government forcefully halted the then ongoing works at the Abeokuta Airport site in Wasimi. They told the Contractors that Ogun State does not need the Airport anymore and directed the Contractors to remove their equipment from the Airport.

They forgot or cared less that the Ogun State Government does not own the project directly. It was also unimportant to them that whereas Ilisan Airport was conceptualized in 2006, with approval secured in February 2008, there was nothing on the ground in 2011, five/three calendar years after, not even the perimeter fence was erected as mentioned earlier. It is curious, ominous and totally against the grain of reason that Ogun State will reject a life-changing infrastructural development from the Federal Government.

For the avoidance of doubt, we want an Airport in Ogun East Senatorial District. These are significant signs of real socio-economic development and was indeed captured in Ogun State Development Plan (2018-2030). Airports should be sited in axis most needed and suitable taking into consideration the safety of our people.

The Abeokuta International Airport project in Wasimi has come to stay. It is serviced by a 12km access dual carriageway (under construction), and, a fully established and defined 6-kilometer Runway, among other components at different stages.

We engaged with the understanding of the Federal Ministry of Aviation, Industry leaders and tested professionals in airport design and construction, airport navigation aids, airfield fire fighting equipment and airside markings and signage.

We are filled with pride that we served the good people of Ogun State to the best of our ability and within the resources available to us. We are pleased that the good people of Ogun State appreciated our modest efforts, and, in return, gave us their support. We have done our bit, and, have moved on. Let everyone who is privileged to hold office in any capacity be guided by the Oath of Office at all times.

The verdict of history and posterity awaits us all. 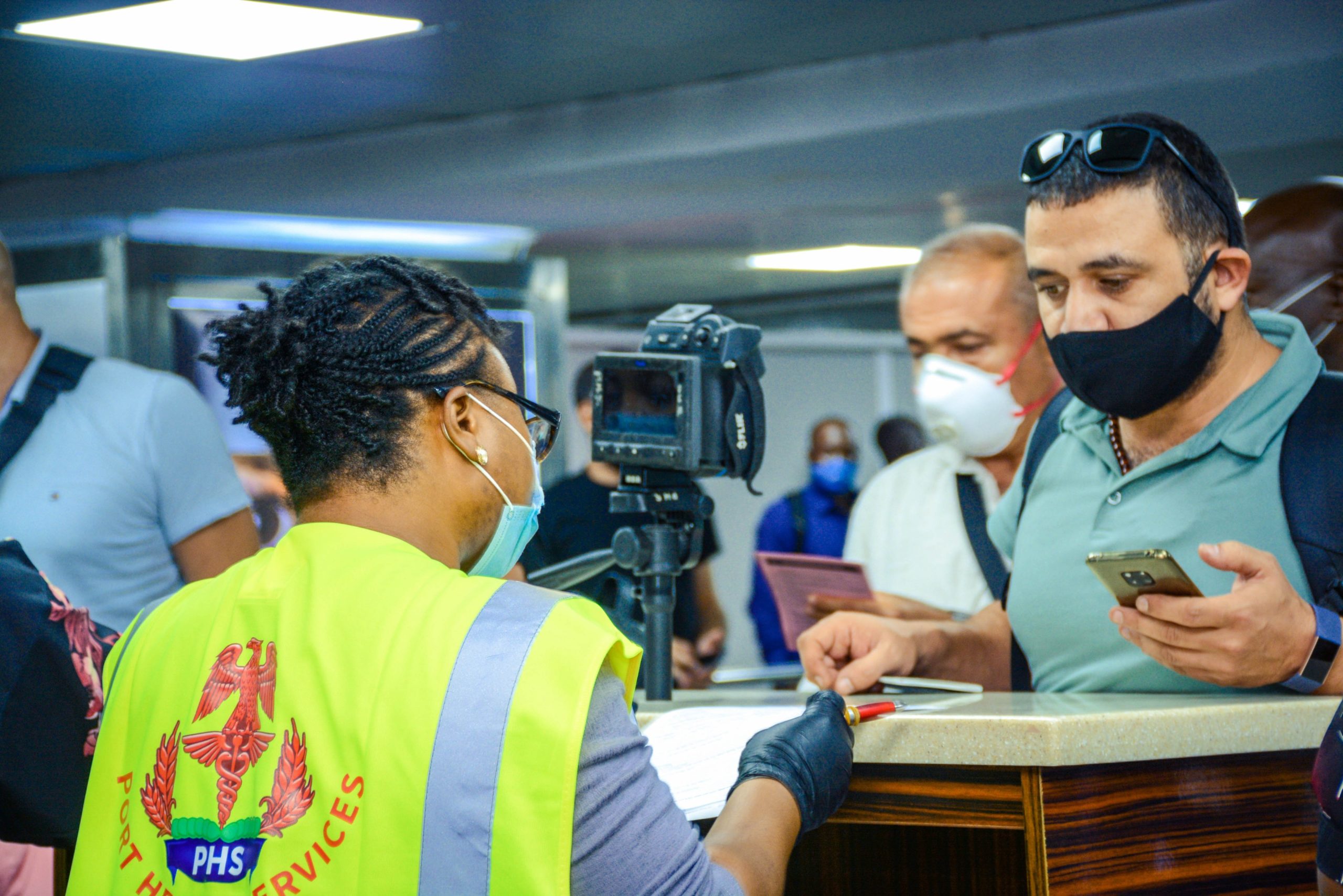 Nigeria and Covid-19 Protocol: Theatre of the absurd. A victim’s narrative