Crashed Helicopter Bell 206B3 being loaded into a truck

The light, Quorum Aviation helicopter with registration Number 5N-BQW flying from Port-Harcourt to Lagos which crashed yesterday at Opebi in Ikeja, has sadly lost the only surviving crew member due to complications arising from the impact, when it crash landed

A statement from Quorum Aviation Ltd, operators of the air charter company, said the three souls on board were – all crew members of the company without any passenger on board.

The media statement noted that, “We have been made to understand that nobody in the building, nor in the vicinity was injured for which we are grateful”

It however expressed, Quorum Aviation “heartfelt condolences to the families of the crew who lost their loved ones in this tragic accident”.

As statutorily mandated, the Accident Investigation Bureau, AIB, announced that it had “commenced investigation into an accident involving a Helicopter Bell 206B3 with the Nationality registration Marks 5N-BQW operated by Quorum Aviation coming from Port Harcourt to Lagos, which occurred on the 28 August, 2020 at the Opebi Area of Ikeja Lagos”.

The media statement from AIB said, “As the investigating agency, AIB needs and hereby solicits for your assistance. We want the public to know that we would be amenable to receiving any video clip, relevant evidence, or information any members of the public may have of the accident; that can assist us with this investigation”.

It appealed that, “The Bureau will appreciate that the general public and press respect the privacy of the people involved and NOT assume the cause of the accident until formal report is released”.

President Muhammadu Buhari has sympathized with Quorum Aviation and the families, friends and associates of victims of the Bell 206 helicopter, operated by Quorum Aviation, which crashed yesterday, Friday, into a building on Salvation Road, Opebi, Ikeja Lagos State

In the statement issued by Special Adviser to the President on Media & Publicity, Mr. Femi Adesina, it said the President prayed that God will console the bereaved families, grant peace to the souls of the dead and speedy recovery for the injure 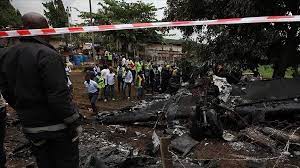