Some of the air planes in United Nigeria Airline’s fleet

The Enugu state government has expressed its willingness to support United Nigeria Airline’s, UNA, in it’s decision to construct a Maintenance Repair Overhaul hangar, MRO, at her operational hub in Enugu.

This confirmation was elicited from the state governor, Hon. Ifeanyi Ugwuanyi, when the management of UNA led by it’s sole proprietor, Dr Obiora Okonkwo, paid a courtesy visit to the governor at the government house in Enugu.

Dr. Obiora Okonkwo said that his airlines chose Enugu as its operational hub because of his love in promoting opportunities that abound in the southeast of Nigeria and the state in particular.

Okonkwo said his airline was interested in expanding its investments in Enugu with the construction of a Maintenance and Repair Organization (MRO) unit of the airline in the state capital.

He said just as the airline had begun generating employment for both expatriates and the indigenes, the MRO will also create more jobs and expand employment opportunities not to talk of income tax that will accrue to the state hence, the request for the state government’s support as a direct beneficiary of the laudable project, Okonkwo explained.

The sole proprietor commended Governor Ugwuanyi for his leadership focus and vision which had seen the state ranked as one of the most peaceful states which now placed it in a better position to attract more investments.s

Responding, the state governor lauded Dr. Okonkwo for making Enugu the operational hub of his airline adding that the decision was appropriate considering the state’s pre-eminent position in the history of the southeast region.

Ugwuanyi acknowledged that tax from United airline had impacted positively on the internally generated revenue of Enugu State and promised to encourage every investor who is desirous of bringing more business to the state.

He said the doors of the state are opened to every investor adding that the state government would do all that is in its powers to encourage more businesses to bring their corporate headquarters to Enugu state.

He said the state boasts of very many investment opportunities adding that return on investments in Enugu state had quadrupled in the past five years.

Governor Ugwuanyi said the state government would work with the management of United Nigeria Airlines to achieve objectives of choosing the state ahead of others in the choice of its operational hub. 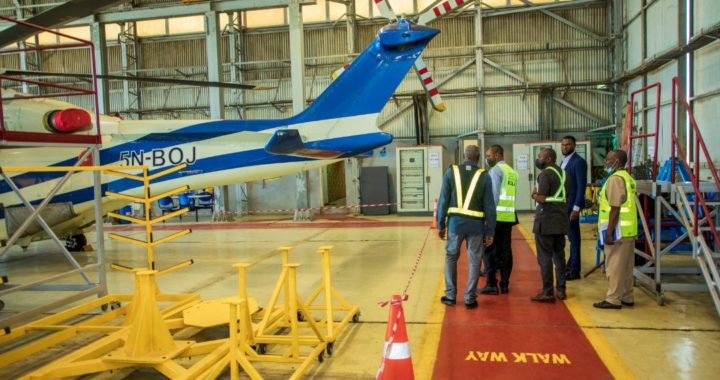 Nigeria’s new MRO to boost the profitability of African airlines