The Lagos State Government has reiterated its resolve to commence construction of the Badagry Deep Sea Port by June, should the re-ratification expected from the federal government arrives on or before the end of April 2022.

Lagos State Governor, Babajide Olusola Sanwoolu, made the announcement at an interactive town hall meeting with the leadership of all the communities that are affected by this noble investment in the maritime economy of Lagos state.

According to the Governor, the Badagry Deep Seaport and the Free Trade Zone Projects were conceived ten years ago by Governor Babatunde Raji Fashola, and the present administration is ready to pursue the project to its actualization.

The state’s number one citizen said the forum was crucial and meant to elicit feelings and complaints of stakeholders and to jointly fashion out a sacrosanct resolution agreeable to all in order to immediately generate a Global Memorandum of Understanding, GMoU, which will enable a fair compensation for peoples’ means of livelihood that will be affected and the displacement from their cherished ancestral homes, among others.

The Governor reiterated, “We know for certain that a project of this nature and magnitude will require a lot of sacrifice on the part of the people and affected communities. I wish to assure you that we are ready and willing to adequately compensate for the loss of economic crops and replacement of lost assets such as buildings and ancestral sites”.

Sanwoolu emphasized to stakeholders at the forum that, ”the Badagry Deep Seaport Project is not just one project. It is a multi-level opportunity for progress for all the people of this state in view of the volume of trade and quantum of investment opportunities that would spring up in the area when the project commences, and when it is completed and operational”, he said.

The Governor gave a clue on the project’s benefit as he enthused, ”when fully operational, it will not only boost the fortunes of the people of Badagry but, also transform the entire economy of our state and that of the entire West African sub-region,” he said

The Commissioner for Commerce, Industry and Cooperatives, Lola Akande, commended Governor Sanwo-Olu for his commitment to the actualization of the seaport project, which was conceived in 2012.
She said the state government earnestly sought communities cooperation in making the state attractive to investors at all times, for the continued growth and development of the local economy.

The Chief Executive Officer, Badagry Port Development Ltd, Mr Didi Ndiomu, said the project would be developed in four phases under a Public-Private Partnership (PPP) arrangement.
Ndiomu said the seaport would be located in the Gberefu area of Badagry, and covered an area of approximately 1,103 hectares.

He added that out of 1,103 hectares, 623 was dedicated for port activities, including an 18-meter draft and 4km quay, making it a port with the deepest draft and widest berths in Sub Sahara Africa. 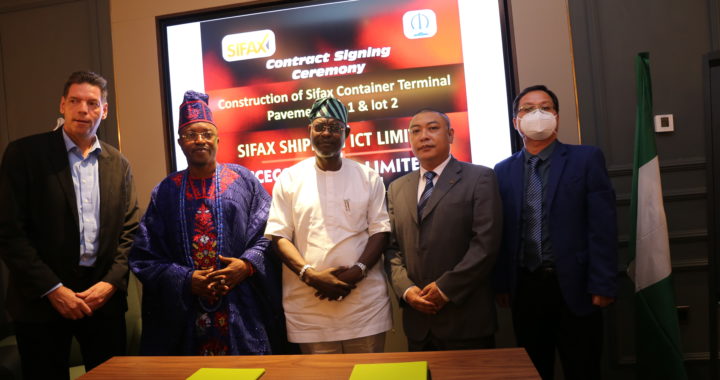