One of the beneficiaries of such evidence-based recommendations is the Cessna Aircraft Manufacturing Company (Textron Aviation), USA.

AIB had dispatched to the firm very strong advice to “consider redesigning the parking brake system of Cessna Citation XLS+ to incorporate take-off protection, visual and aural warnings and also make the position visible to both occupants of the cockpit”.

This recommendation from the globally ranked fourth agency in accident investigation, AIB-N, is elicited from its latest report released for the general public consumption of three final accident reports.
The above recommendation is in furtherance to its mandate of conducting foolproof investigation and presenting sacrosanct findings with the view to sustaining the enviable safety record and rolling back the safety frontier in Nigeria’s air space.

While presenting the final report of its investigation of the aborted flight which occurred on 3rd October 2018, of a Cessna Citation 560 XLS+ aircraft, with nationality and registration marks 5N-HAR operated by the Nigeria Police (NP) which was on a flight routing Nnamdi Azikiwe International Airport, Abuja (DNAA) to Akure Airport, Akure (DNAK) via Sir Abubakar Tafawa Balewa Airport, Bauchi (DNBC) and back to Abuja (DNAA), it was reported that six persons comprising of three crew members and three passengers were on board when the aircraft touched down in Bauchi.

AIB reported that the “Pilot Flying, PF, set the parking brake and shut down the left engine for the passengers to disembark. Thereafter, PF instructed the cabin crew to put the chocks ON. The PF maintained that he was not aware that a transit walk-around was carried out on ground Bauchi by the Pilot Monitoring, PM.

According to the AIB-N report, at the start of the return trip after the crew had been granted the quick turnaround it requested from the Duty Air Traffic Control Officer (DATCO), “the crew reported that during the take-off roll on RWY 17, after Rotation speed (Vr) was attained, the aircraft did not get airborne hence, the Pilot Flying, PF, commanded for an abort. All persons on board disembarked without injury”.

AIB unearthed among other causative factors for the aborted flight, “uncoordinated flight as a result of inadequate Crew Resource Management (CRM) that led to the partial release of parking brake, which resulted in rejected take-off”.

One of the five critical safety recommendations was directed to the aircraft manufacturer, Cessna Aircraft Company (Textron Aviation), USA.

AIB-N recommended that “Cessna Aircraft Company (Textron Aviation), USA should consider redesigning the parking brake system of Cessna Citation XLS+ to incorporate take-off protection, visual and aural warnings and also make the position visible to both occupants of the cockpit”.

One of the recommendations directed to the Nigeria Police Airwing was that it should develop Operations Manuals and Standard Operating Procedures in accordance with the provisions of sub-part 8.14 of the Nigeria Civil Aviation Regulations for guidance.

Another recommendation urged thus; “the Nigeria Police Air wing should ensure that flight crew adhere to all provisions of Crew Resource Management, CRM, during flight operations.

AIB among its recommendations charged that the “Nigerian Civil Aviation Authority should ensure that Nigeria Police Air Wing, NPAW, flight operations are carried out in accordance with relevant provisions of Nig. CARs 2015”.

AIB reported that on board were 114 persons including two cockpit crew, three cabin crew and fuel endurance of three hours. And that at about six minutes after take-off, the number two engine turbine vibration began to fluctuate.n interrogation, the flight crew reported they heard a loud bang from the right side, which caused airframe vibration and yaw to the right. Another loud bang occurred the second time and the crew were a little destabilised.

The failure of number 4 and 5 bearings of engine number 2 led to the loss of power during approach.
Hence the approach became unstable, the Autopilot disengaged, TO/GA was engaged, accompanied by an Autopilot warning. The flight crew executed a Missed Approach and AZM 2316 was
vectored to fly heading 350⁰ by the ATC.

Again, the Approach yet was unstable and the flight crew executed a second Missed Approach. The aircraft aligned properly on profile during the third landing attempt before reaching the final approach fix. At 11:35 h, AZM 2316 landed on runway 21. The 114 persons on board including two cockpit crew, and three cabin crew disembarked unhurt.

The renowned investigators with laser accuracy identified four (4) contributing factors to the serious incident. And in its preliminary report, issued an “Immediate Safety Recommendation” on 4th February 2019.

The safety recommendation issued, which was for a very urgent and immediate action was that, “NCAA should ensure Azman Air Services Limited immediately takes further necessary step to ensure that it reviews the training of the incident flight crew in order to be able to understand and recognize engine failure/malfunctions and its effect (s) at every phase of flight before they are allowed to resume flight duties”.

It is very grievous and disheartening that the recommendation issued within 30 days of the incident (4th February 2019) for immediate execution is yet to be implemented three (3) years after. What a clear and present danger test to air safety by the agency saddled with safety oversight of air operations in Nigeria, the Nigerian Civil Aviation Authority, NCAA.

It is expected that the seven (7) safety recommendations proffered (Safety Recommendation 2021-001 to 2021-007) as a corollary to the findings on the incident will be given the very urgent attention they deserved as they all bordered on safety-critical elements. (Read details at www.aib.gov.ng).

The report revealed that at “3:50:23 h, NGL2092 further reported to Minna Tower that there was an accumulation of storms on the final approach path. They requested to deviate left and extend the downwind of RWY 05. Minna Tower acknowledged and instructed NGL2092 to report when clear of weather”

“The flight crew stated that at about 2000 ft. the autopilot disengaged and then they elected to fly manually. At 03:55 h, NGL2092 landed on RWY 05”, the AIB report revealed.

AIB reported that the “aircraft touched down on the right of the centreline of RWY 05 with the left main wheels first and the number one engine cover impacted the runway and was dragged along the runway centreline. Minna Tower passed the landing time and issued taxi instructions”.

The second factor was the decision to land in view of the un-stabilized approach with a no go-around decision.

In the total of seven safety recommendations issued, the Federal Airports Authority of Nigeria, FAAN, had 4 to contend with, Nigerian Airspace Management Agency, NAMA, had one, Nigerian Civil Aviation Authority, NCAA, had one and Max Air had one. 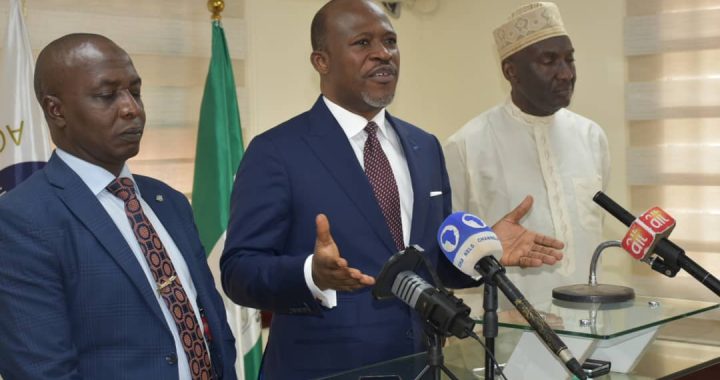