Motor vehicle dealers, importers, and the buyers of new or fairly used but imported (Tokunbo) vehicles who, by some circumstances may be compelled to move about with the newly acquired vehicle in any part of Nigeria, have been urged to do so only with the acquired Temporary Vehicle Tag, TVT.

That is the law of the Federal Republic of Nigeria to enhance road safety and inspire data capturing as regards vehicular movement and that of vehicles acquisition in the country.

Lagos State Government, through its very vibrant agency, Motor Vehicle Administration Agency, MVAA, has concluded plans to ensure everyone that procure a vehicle and approach it for TVT gets his/her demand and in good time too.

The General Manager, MVAA, Mrs ‘Lape Kilanko, made it known that the use of TVT is not an invention of Lagos State Government but that of the federal government but Lagos State in its tradition of pioneering excellence, is given serious attention to enforcement of the directive and the law of which its infringement attracts a penalty

‘Lape Kilanko in a chat with media practitioners in her office at Lagos State Government Secretariat, Alausa, Ikeja, said Lagos State Government is ready to enforce the federal law which prohibits operating, movement of any machine, equipment or automobile on the highway without proper means of identification.

She said in an attempt to assist the citizenry not to flout the law inform the birth of the Temporary Vehicle Tag, TVT.
The MVAA helmswoman explained that the procurement of TVT will provide the legal cover for one to drive his/her vehicle within the country for at least, the first 30 days until circumstance allows the owner to do proper registration of the vehicle and one could renew the TVT for another month.

Kilanko narrated that some may wish to register their vehicles in other states outside Lagos and may wish to move about before their trip to the hinterland, the TVT absolves them from the eagle eye of the Vehicle Inspector Service, VIS, Federal Road Safety Corps, FRSC and the Nigeria Police, who have all been armed to enforce the law.

She further explained the issue of Dealers Plate does not arise again as the TVT will provide the necessary temporary cover before proper vehicle registration is done.

‘Lape Kilanko explained that at any of the MVAA offices throughout the state and even at the sea ports, the personnel have been schooled on the essence of promptness, so in less than ten minutes one could procure the TVT if armed with necessary documents.

On what makes TVT superior to Dealers Plate Number, DPN, she explained that the DPN is not specific to any particular vehicle, and when the unexpected happens there could be difficult to ascertain the specifics.

Unlike the TVT which is vehicle specific, which would have collected some information about the vehicle being registered, would surely have built a temporary database about each of the vehicles issued TVT.

And the beauty in the TVT Kilanko explained is that it is nationally recognized and accepted in all the states of the federation and all the federal and states traffic agencies have fully bought into the program.

The GM said the cost of procuring the TVT is pocket friendly as its only N3,000.00k., in addition to other original copies of documents to be sighted and photocopies submitted.

‘Lape Kilanko reminded the general public and prospective buyers of new and fairly used vehicles that all the law enforcement agencies have been coopted into the program and are ready to fully enforce the law without minding whose ox is gored. 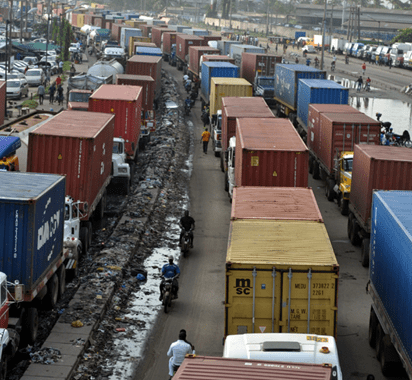 A Thought On How To Make Sanity Permanent On Roads To And From Apapa, Tin Can Ports