The Western Marine Command (WMC) of the Nigeria Customs Service (NCS) has intercepted contrabands worth over N1.4 billion, within the first quarter of 2021.

The Controller of the command, Comptroller Olugbenga Peters, stated this on Friday, during a media conference at the command headquarters.

Comproller Olugbenga Peters said the WMC made a total of 12 Seizures in the first quarter of 2021 ranging from Rice, marijuana, Second hand clothing and PMS with a total Duty Paid Value (DPV) of Seven Hundred and Twenty Million, Five Hundred and Forty One Thousand Naira (₦720, 541,000.00) only.

He said the most recent among the seizure was the 147 sacks of Marijuana with an average of 45Kg per sack, giving an estimated total of 6,615Kg.

He said six suspects were arrested in connection with the seizure which was made on Saturday, 27th March 2021, by the operatives of the Coastal and Harbour Patrol (Bar-Beach) on credible intelligence along Ibeshe Beach on the high sea.

The Customs boss added that the goods together with the suspects were brought to the command and upon physical counting, it was found to be 147 sacks of Marijuana with an average of 45Kg per sack, giving an estimated total of 6,615Kg.

Olugbenga Peters narrated that, “the Western Marine Command has had several collaborations with the National Drugs Law Enforcement Agency (NDLEA) Director, Seaport Operations, and it is in view of continuous synergy and its statutory responsibility that we are handing over the marijuana together with the Six (6) suspects to the representative of NDLEA in the interest of National Security.”

Recall that the operatives of the Command made a massive seizure of over 10 tonnes of Cannabis Sativa (Marijuana) valued at over a billion Naira in 2020.

The seizure was said to be the highest single seizure of Cannabis in the history of the service. 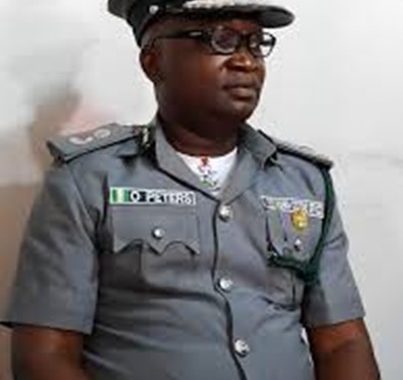