Commercial drivers of all classes and corporate drivers in various private and public sectors of the Lagos State economy have been offered the golden opportunity of attending their mandatory annual drivers’ refresher course online, in the comfort of their homes/offices, and obtain current drivers card from the Lagos State Drivers’ Institute, LASDRI, to fulfil all righteousness as bonafide drivers prospecting in the smart city of Lagos State.

Mrs Tiamiyu Afusat Abike, General Manager/Chief Executive, Gm/CE, LASDRI, who made this known said smart drivers in the state of aquatic splendour and some outside Lagos State, have availed themselves of the modern technology that Governor Babajide Olusola Sanwo-Olu, of Lagos state, has made available to LASDRI for the benefit of the good drivers in Lagos state.

The LASDRI CE, said in the light of the ubiquitous COVID-19 pandemic that kept mutating and now to omicron, with the other that is just rearing its ugly head, Monkeypox, the drivers’ institute has resolved not to lower its guide but deployed extensively, Information, Communication and Technology, ICT, apparatuses in its training modules.

The erudite Chief Executive of the drivers’ institute also appeals to corporate organizations and individuals of high net worth who would acquire multimillion naira worth of exotic vehicles but find it burdensome to part with a paltry sum to train their drivers are merely displaying a gross lack of wisdom.

She said a well-trained driver will save lives through his or her dexterity behind the wheels while the ignorant and lethargic driver would find it hard to understand the modern mechatronic vehicle he or she’s handling, talk less of being conversant with the road traffic laws and even road signage. Such drivers, she said often constitute a clear present danger to the occupants and a threat to the lives of other road users.

Hence the teachers’ teacher in Mrs Tiamiyu, called on the management of companies in the organized private sector and those prospecting in the informal sector, to give cognizance to the annual retraining of their drivers so as not to be caught on the wrong side of the law.

She argued that anyone frugal in investment would never allow the annual retraining of drivers in his employment to be skipped so also for any Admin and Human Resources Head that knows his/her onions, would ensure drivers in the organization do not miss out on the new knowledge they are bound to acquire when they attend the drivers’ refresher course either physically or virtually.

The General Manager emphasized that no matter the long years of a driver’s experience on his job, it is imperative for skills and knowledge to be upgraded in accordance with the developmental trajectory in the global community.

She added that the rampant excuse of a busy schedule for drivers was another reason why the online digital training platform of LASDRI was created and publicized.

Mrs Tiamiyu said any driver that is finding it hard to attend physically could merely log on to www.lasdri.org to make payment online and shall be offered the computer-based training materials without delay and at no stress, starts the training.

The successful students she said shall be offered online, a temporary LASDRI Recertification Card. The card is tenable for only two weeks within which the candidate shall visit the office to collect the original.

However, she cautioned those with the temporary recertification card to be mindful that after 30 days of issuance, the temporary card becomes untenable and if ever accosted by traffic officers of the Lagos State Traffic Management Authority, LASTMA or by officers from the Lagos State Vehicle Inspection Service, VIS, or the Police, such driver shall be on the wrong side of the law.

She advised the successful drivers via the online platform to come to the LASDRI office without delay to obtain the plastic recertification card to enable them to embark on their businesses without running afoul of the Lagos State Road Traffic Law as amended in 2018.

On the security features of the LASDRI recertification card, Mrs Tiamiyu warned that anyone in possession of the card should totally eschew involvement in any vice as such persons would be hunted to the micro space, anywhere they may be in the universe.

DETAILS, to be featured in the EXECUTIVE CHAT of the print edition of NTH 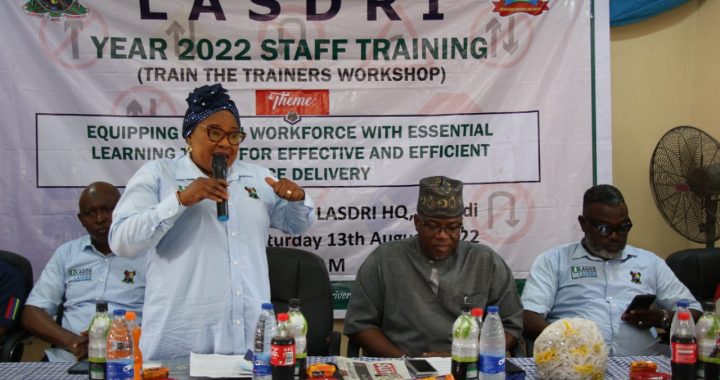