The Med-view Airline’s slot of four weekly frequencies to London Gatwick still subsists as the airline merely suspended its operations to London and as such couldn’t have ever made the European Union Safety list as erroneously claimed by a blogger.

According to a statement by the management of the airline in Lagos, Nigeria, it stated that the claim that Med-view Airline was blacklisted by the United Kingdom Civil Aviation Authority, UK CAA, existed only in the imagination of the peddler of such fallacious rumour.

Med-view Airline urged anyone that values the truth to check the records of the UK CAA, to confirm if there was an issue of safety with the airline.

The statement however elucidated that Med-view began operations to the London-Gatwick route in November 2015, while operating its Boeing 767-300ER aircraft.

The statement recounted that at a stage, the European Union Aviation Safety Inspectors, EASA, observed some safety issues which lead the Management to substitute the equipment for a B777-200 aircraft leased from Euro Atlantic Airlines.

The management in its narratives averred that after a few period of operations, the replacement aircraft also developed technical glitch.

The statement noted that after several studious attention to its avionics and still could not meet Med-View Airline’s in-house operational standards, the management took the decision to suspend its service to the London route.

However, a check on the website of the European Aviation Safety Agency, EASA, revealed the inclusion of Med-view Airline in its latest Safety List of airlines that had been barred from the European airspace as published since 25th November 2021.

EUROPEAN AVIATION SAFETY AGENCY’S PRACTICE
What is the EU Air Safety List?
The EU Air Safety List (ASL) is a list of air carriers from non-EU countries, which do not fulfil international safety standards. The carriers on the ASL are banned from operating to, in and from the EU. Carriers that do not operate in the EU can also be put on the ASL, in order to warn the public travelling outside of the EU about safety concerns. If the safety authorities of a third country are not able to fulfil their international safety oversight obligations, all the carriers of that country can be put on the ASL.

The ASL, while not popular with the affected countries and carriers, has developed into a strong, and internationally recognized tool to help improve the safety of international aviation.

This is the case both for flights to the EU, but also for aviation outside of the EU. ASL is also seen as a strong preventive tool, because when under scrutiny, countries tend to improve their safety oversight to avoid seeing their air carriers on the list.

Which carriers are currently on the EU Air Safety List?

After the update of November 2021, the 38th update, 97 air carriers are banned from EU skies:
• 90 airlines certified in 15 states[1], due to a lack of safety oversight by the aviation authorities in these states;
• Seven individual airlines, based on safety concerns with regard to these airlines themselves: Avior Airlines (Venezuela), Blue Wing Airlines (Suriname), Iran Aseman Airlines (Iran), Iraqi Airways (Iraq), Med-View Airlines (Nigeria), Skol Airline LLC (Russia) and Air Zimbabwe (Zimbabwe).

An additional two airlines are subject to operational restrictions and can only fly to the EU with specific aircraft types: Iran Air (Iran) and Air Koryo (North Korea).

The Air Operating Certificate of the airline erroneously barred is MVA/AOC/10-12/05. Its ICAO three-letter designator is, MEV. While Nigeria is the state of the operator.

A formal request for an explanation as to the circumstances that warranted EASA/EU to have included Med-view Airline among the latest list was sent to EASA official email address.

As soon as an official response is received, NTH will not withhold the explanation from our valued readers. 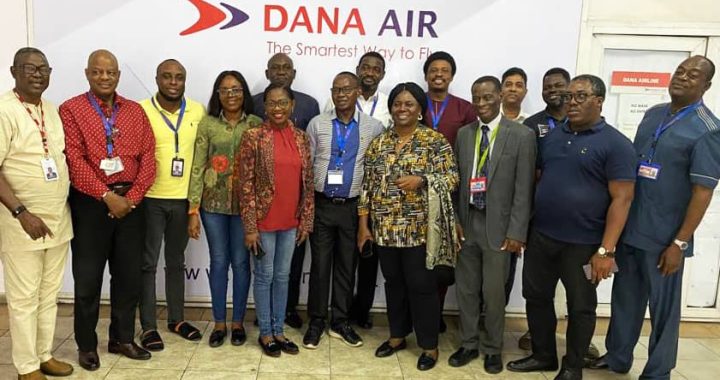 DANA Completes In-House SMS Training, A Precursor for Returning to the Sky